What Everyone Needs to Know About DUI – Part 3: Breath Tests 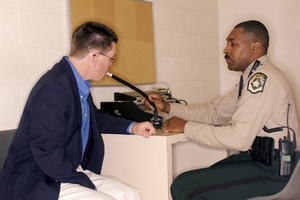 To blow or not to blow: That is a tough question. Unlike last week in part 2 when you learned that other than for entertainment purposes with your friends, there is no real benefit to performing field sobriety exercises, deciding whether or not to provide a breath sample can be tricky. Hopefully after reading this blog you will have the information necessary to make the right choice if you are ever arrested for DUI and forced to decide.

I recently defended 2 particular clients against DUI charges; one in St. Johns County who refused, and one in Duval County who blew. Given the other facts of their cases, if they had made the opposite choice their cases would have likely never been filed or easily reduced or dismissed.

Case #1
K.D. refused to provide a breath sample after being arrested for DUI. The problem with her refusal was that she had credible witnesses who corroborated her statement that she only had 2 drinks while out with friends. But because she had an open container of alcohol in her car and performed very poorly on the field sobriety exercises the prosecutor felt confident in their case. Had K.D. blown, she would likely have been well below the legal limit and charges may not have been filed against her.

Case #2
C.A., on the other hand, blew a .12 and was promptly charged with DUI. The problem with him blowing was that his stop and field sobriety exercises were on video. He looked great on the video, listening attentively, cooperating with the Florida Highway Patrol Officer, and performing very steadily. Had he not blown, the prosecutor admitted to me she would not have filed the case.

As with K.D. and C.A., the importance of having a good idea of how much you have had to drink can not only save your life, but can also help your criminal defense attorney if you find yourself charged with DUI. There are many factors that go into the rate at which your breath alcohol content (BAC) raises as you drink alcohol, including:

As a general rule of thumb, if you only drink one standard drink (shot, beer, glass of wine) per hour most people will remain under the legal limit of .08. Even though a breath test result above a .08 can be detrimental to the criminal case, there are other consequences of refusing that warrant mentioning.

The Penalties for Refusing to Blow

FACT: Driving is a privilege, not a right. As such, by accepting a Florida driver’s license you agree to provide a breath sample if you are ever arrested for DUI. This doesn’t mean you must, but it does mean your privilege to drive can be suspended if you don’t.

Refusing to do the breath test for the first time will result in your license being suspended for one year. If you refuse a second or more times the suspension is for 18 months. In addition, if you refuse a second or more times you can actually be charged with an additional misdemeanor crime pursuant to Florida Statute 316.1939. Even worse, if the person holds a commercial driver’s license (CDL) their privilege to operate a commercial motor vehicle will be permanently revoked for a second refusal.

The Implications of Refusing or Accepting a Breath Test

With such harsh, potentially career ending, penalties for refusing to blow, why would anyone ever do so? Simple, the single most powerful item of evidence in most Driving Under the Influence (DUI) investigations and cases is the Breath Test result. To prove a DUI in Florida the State needs to prove that a person was driving or in actual physical control of a motor vehicle while they were either under the influence of alcohol or drugs to the extent their normal faculties were impaired, or while they had a BAC of .08 or higher. In most DUI cases whether a person is driving or actual physical control of a vehicle is not at issue. The issue typically is whether the person was impaired or had an unlawful BAC. If a person gives a breath sample below a .08 it is often a very powerful piece of evidence for the defense that could result in the charge being reduced, or in some cases even dismissed, depending on the facts of the case. However, it is important to realize that even if a person agrees to a breath test and blows below a .08 they still may be found guilty of DUI if a jury believes beyond a reasonable doubt that their normal faculties were still impaired. See last week’s blog on field sobriety exercises for how a jury could believe this.

On the other end of the spectrum, if you blow above a .15, you will face enhanced penalties in your DUI. Specifically, if you are convicted and the high blow is found true, the court fines will increase and you will be required to install an ignition interlock device on your vehicle. This is basically a breath test device you must blow into to start your car. You must also blow into it intermittently while driving to ensure you aren’t consuming alcohol on the go. Aside from the stigma of having an interlock device in your car, the equipment is very expensive to have installed and maintained.

If you do decide to provide a breath sample and are over the legal limit there still may be a defense to the DUI charge. There are many legal protocols that must be followed for the breath result to be valid. For instance:

As an experienced DUI Defense attorney I know what to look for, and that can mean the difference between the blow result being used against you or getting it suppressed.

Ultimately the decisions whether or not to do field sobriety exercises or provide a breath sample are not ones you ever want to face. I hope this DUI blog has been informative and will aid you in those decisions if you do. When in doubt, refuse to perform field sobriety exercises, use the 1 drink per hour rule of thumb to decide on the breath test, make no statements to law enforcement and contact the Albaugh Law Firm at your first opportunity.

By Albaugh Law Firm | Posted on April 3, 2015
« What Everyone Needs to Know About DUI – Part 2: Field Sobriety Tests
If Only Life Were Like Monopoly »