$35B Rise in Household Debt in Three Months 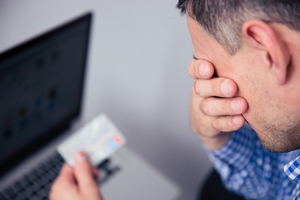 Quarter 2 of America’s 2016 fiscal year saw a spike in the total household debt of $35 billion, bringing it up to $12.29 trillion. How do the average American families wind up adding such a large figure to the national household debt? It is believed the spike was caused by two financial categories: credit cards and auto loans.

When the economy was in its biggest, recent slump, people put away the credit cards and only bought what they knew they could afford. Since late 2014, that trend is turning around again; credit card balances are now up $70 billion from what they were two years ago. The hope of a rising economy seems to have generally stirred up people’s willingness to lean on banks and creditors for part of their finances. Despite the rise, all credit card balances across the country are $400 billion less than they were in 2008, when the economy was poised for trouble.

Determining if the rise in credit card debt and household debt shows positive or negative trends is a delicate subject. Every bit of information seems to suggest both ways at once.

On one side, people with subprime credit scores are getting them at an increased rate since 2013, allowing them to make larger purchases and attempt to finance them over time. On the other, if they are unable to complete their payments, it would mean a larger number of people falling into even more household debt. Relying entirely on credit cards to make ends meet is an efficient way of piling on debt.

The good news is that delinquency rates show signs of serious improvement. Debts that are 90 to 180 days delinquent or unpaid make up less than 1% of total card balances. That number hasn’t been so low since 2003. Debt balances that are so low they are considered derogatory and capable of bank write-offs are also near a low at only 6.2%. The information indicates that more people are getting ahold of credit cards, even when they have bad credit score, but more people are also able to pay off their monthly minimum pay requirements. Still, the threat of bankruptcy hangs over many households.

It should also be noted that the $12.29 trillion national household debt is not something to panic about, economists say. The $12+ trillion debt does not mean that is how much money is missing from the American economy but instead means that is how much money in the American economy is tied up in loans and credit. If everyone suddenly defaulted and had no property of real value, an occurrence that cannot happen overnight, then the $12.29 trillion household debt would become “real.”

There is a great deal of information about this subject. If you would like to know more, ValueWalk, Fox Business, The M Report, and many others have online articles you can read. If you believe you might need to file for bankruptcy due to overbearing credit card loans, mortgages, or other financial troubles, you are not alone. Call 904-450-5313 to connect with Albaugh Law Firm and our Jacksonville bankruptcy attorneys. We can help explain your rights and options during a free case evaluation.

By Albaugh Law Firm | Posted on September 20, 2016
« How Much Household Debt is There in America?
Guidelines for Concealed Carry Laws in Jacksonville, Florida »