Is the National Debt Really Something to Worry About? 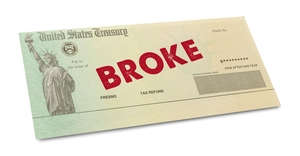 If you have been following the upcoming 2016 presidential election at all, you have likely heard about the rising national debt as being one of the main topics of debate. Since the year 2000, the country’s debt has skyrocketed by $5.7 trillion to a staggering $19.5 trillion – more than three times as much debt as the total amount of debt the country had accrued since its inception in 1776. As economists, hedge fund managers, and budget directors warn of an impending collapse, should the average American be worried? In short, yes.

Unfortunately, many people remain unaware of the consequences that are sure to come as a result of wasteful government spending. Debt is, in essence, borrowing prosperity from the future only to be paid back at a later date. Like the old adage goes, there is no such thing as a free lunch. Historically, any accelerating growth in debt in any area eventually leads to a serious reversal or crash to where the bubble first started. Generally speaking, the sooner it happens, the shorter the corrective period tends to be. Unfortunately, many banks have used all of the means at their disposal to attempt to postpone the impending collapse, creating more debt and devaluing the purchasing power of the dollar to abysmal levels, worsening the problem and setting the stage for a more severe crash. Every dollar that was borrowed must be paid back at some point – the only question is when.

Here are a few facts and statistics courtesy of Forbes magazine which put the nation’s financial standing in perspective:

How Can I Prepare?

Given the current economic outlook, it is imperative that individuals take certain steps to prepare themselves financially. To make sure your assets and interests are guarded in the event of economic collapse, it is important you do the following:

At Albaugh Law Firm, our top-rated St. Augustine and Jacksonville debt relief attorneys are passionate about helping individuals overcome their struggles and get back on the road towards a financially secure future. If you are struggling financially and are unsure how you will make ends meet in the event of a financial crisis, we invite you to contact our office today to discuss your legal options in full. Whether through bankruptcy or loan modifications, we have what it takes to eliminate your debt and ensure your best interests are protected.

Fill out an online form today to get started towards protecting your financial future.